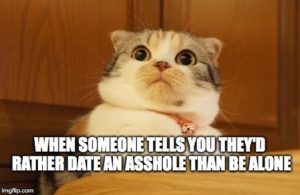 Intellectually we’re all acutely aware that we can’t change another person.  Emotionally that is not always the case.  You will not be that one person who defies the norm.  Don’t get sucked into the trap of thinking the other person would be perfect if they changed just that one little thing.  It’s not going to happen.  Stop wasting your time.  People are not fixer-uppers.  People will only change if they themselves want to do it.  You can’t force or coerce them.  Any substantial change has to be on their own terms.  Even if you are successful, that change will only be fleeting.  If you are inexplicably drawn to people you want to change, don’t act on that, get help now before you hit that downward spiral.

On the flip side, don’t let someone else change you.  We’re not talking about small issues that people can compromise on like let’s DVR “The Flash” and watch “This is Us” or where to go to brunch.  We’re talking core personality and appearance issues.  You should never change who you are just to make someone else happy.  Don’t let another person walk all over you.  You can never be happy with someone else unless you are happy with yourself first.  This is probably stuff you’ve all heard before, and it’s actually true.

During the initial stages of a relationship, heed the warning signs that someone wants to change you.  Any sentence that starts with “We just need to do something about….” or “You really should be….”.  These will never, ever end well.  You will end up being miserable.  You’ll have a really horrible breakup and then have to listen to your friends tell you how they never really liked him/her and knew this would happen.  Avoid those told-you-so-s.  Think of it like buying a car.  Would any sane person buy a car with a manual steering system, get it home and then say I think I’ll rip this out and install power steering?  The answer is a resounding NO.  Dating is just a test drive.  You try things out and decide if you can live with them or if it’s a total deal breaker.  If it’s a deal breaker, move on.

Don’t get stuck in something that doesn’t work for you.  You’ve got choices.  You’ve got options.  People forget that.  They get stuck trying to make a bad relationship work.  There’s no prize at the end.  You don’t get a big gold star on your forehead for putting up with an asshole for years.  Don’t fall back on the “But I don’t want to be alone” argument.  It’s weak.  Being alone is so much better than being with someone who is hypercritical of you.