Just Say No To Negging 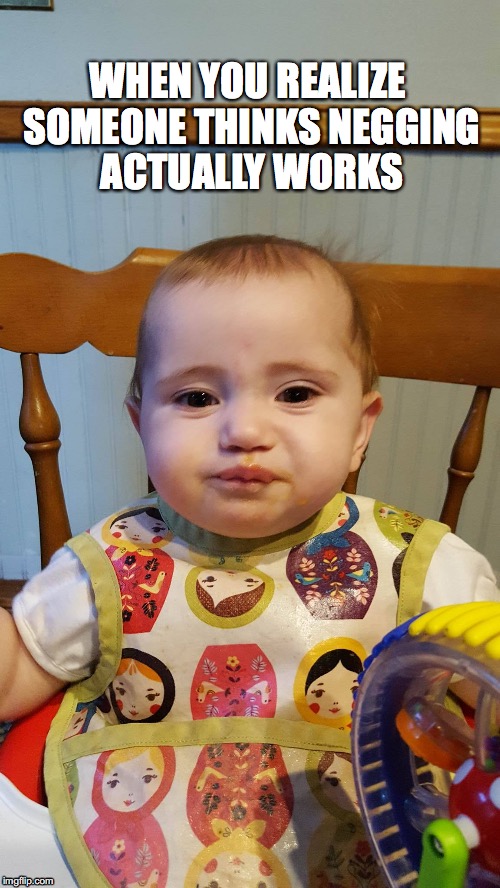 This has become a rather common term, but for those who are unfamiliar “negging” is the practice of making negative or slightly insulting comments to someone you find attractive in order to make them take an interest in you.  In a nutshell it’s stupid.  Rather than elevate the level of discourse as a species, self proclaimed pickup artists advocate openly insulting someone to undermine their self-confidence as a practical means to strike up a conversation.  There are various ranges on the spectrum of insults.  It can come in the form of back-handed compliments, bizarre statements or something outright nasty.

There are two personal experiences that stand out for me.  The first time it happened, it was a super blatant back-handed compliment, poorly delivered.  I was at a bar waiting for some friends so we could go to dinner.  Some random guy comes up to me and says, “You’re cute enough, but we need to do something about your hair”.  He stood there looking super smug, and I responded with “what the actual fuck is wrong with you”.  I went on from there that there was nothing wrong with my hair and nothing would compel me to take any random guy’s opinion of my appearance into consideration.  Clearly this was not the response he hoped to garner.  In his perfect world, I would have responded with inquiring what he thought was wrong with my hair.  We would have drinks which would eventually lead to sex.  It’s important to remember that those who neg are delusional.  They think they are some how creating a “level playing field” or “breaking through social defenses”.  They have bought into charlatans preaching a science behind it.  There is no science behind being a dick.

Further on the spectrum are bizarre statements.  These can range from the obvious to more subtle variety.  The goal is always the same, throw the person off guard, create seeds of self-doubt, and make the person believe their knowledge is lacking.  I was at LACMA wandering through galleries and had stopped to look at a painting that had a very interesting impasto technique.  The paint was layered fairly high and it was impressive.  It’s important to note that on placards next to paintings at LACMA materials used are noted.  As I’m standing there a guy comes up to me and says, “See that…that’s paper mache”.  I’m surprised.  It looks nothing like paper mache, and he could read the placard, it’s right there.  I respond that it’s not; that it’s paint.  He tells me that there’s no way that paint could come out like that it has to be paper mache under it.  I tell him again it’s not, and that even if he doesn’t believe me that there are placards that tell you exactly what materials were used.  Then he tells me the placard is wrong too.  So I told him to have fun being wrong, and moved on.  He looked dumbfounded.  Apparently I was just to believe him to be an expert since he had a penis.

Fret not.  If you find yourself on the receiving end of negging you’ve got some options.

You have to gauge each situation for the most effective response.  Since their goal is easy sex, most will just move on fairly quickly.  Remember show no fear, find your inner bitch, no one should tolerate this type of shitty behavior.