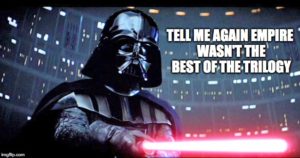 First dates can be amazing, magical experiences said no one ever.  The majority of the time they’re a little awkward with a chaser of weirdness.  It would be great if people came with warning labels, but unfortunately that’s not case.  There are some people who are able to mask their crazy until date #2 or #3.  So how do you cut through that and decide if this person is the type you want to spend your time on?  Answer – The magic question.

What is “the magic question” you might ask?  It’s a question that makes a person think and will reveal aspects of their personality they might usually try to mask.  It’s not the typical questions one might ask, like “what are you looking for in a relationship?”  or “what do you do for fun?”.  Everyone has a canned response to those, because they are expected.  The magic question is not the same for everyone.  It needs to be in an area in which you have some expertise.  However, avoid giving up the fact that you have expertise in the subject.  People will tend to give an answer that may impress rather than what they really think.

My go to question was always “what do you consider to be the most pivotal political moment in the twentieth century and why?”.  Not only did it put that poli sci degree to good use, but it also provided key personality indicators.  If my question wasn’t taken seriously it led me to believe that I wouldn’t be taken seriously.  A curt answer was indicative of little depth.  Some would question the question at length which was very off putting.  I wouldn’t have asked if I didn’t want to hear the answer.  Long term it made me seriously consider if I wanted to have a relationship with someone who refused to answer a question.  Not everyone will have a definite answer, but if they are open to discussing the subject it’s a good sign.  If they have an answer and demand that you agree with it, then run… run far far away as fast as you can.

You’re probably wondering what kind of crazy responses I got.  Well one guy made up a fake conference and told me it was where people like him could change the world.  Then he tried to abruptly change the subject.  Upon further scrutiny, he finally gave up that he really didn’t have any plans to change the world.  He just wanted a wife to cheer him on in life whatever he did.  We parted ways.  Another dude said the use of the atomic bomb which is a perfectly acceptable answer, however, he was not open to discuss any other options.  He went so far as to insult my intelligence and tell me how I clearly needed his guidance.  Subsequently there was not a second date.  I did get some acceptable responses and had some good discussions.

This leads us to compatibility.  Not everyone is compatible, and you’re not going to initially know that.  If it’s not working, then it’s not working.  Don’t make the mistake of trying to salvage a bad date.  It’s not going to make you a better person.  It will not be life changing.  There is no point to it.  Learn from it and move on.  Bottom line, life is too short to date an idiot.  Find your magic question, and weed out the crazy.